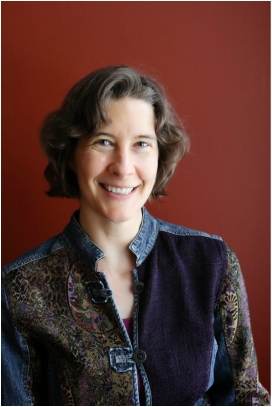 I grew up in rural Illinois, in an old farmhouse with lots of unused land around it. It was very isolating, I didn't have a lot of friends nearby, so I entertained myself by asking myself questions about how things worked. Why was the glass in the window frames wobbly rather than smooth, like the glass in my school's windows? Why did everything get quiet just before the sun went down? Why did the birds chirp more and more every morning until the middle of June, the summer solstice?

I never shut up in classes, and I'm sure I annoyed teachers with all my questions. Most of them didn't have answers, of course, so that was probably more of a pain. Oh well, too bad! I learned a lot about what we don't know, and that probably is the basic thing that draws me to science -- trying to know more about what we don't know yet. There's a lot of work to do!

I became drawn to understanding the mind and brain because my whole family was eccentric and I wanted to understand them -- and myself. I went to Oberlin College, graduated with highest honors in neuroscience, having done some computational neuroscience work that I really enjoyed -- I made a computer model of brain hormonal release. Then I went into a Ph.D. program in Neuroscience at U. California, San Francisco. I stayed there until I got my master's, but I had more growing-up to do and ended up leaving before I got my Ph.D.

I tried a lot of jobs that weren't focused on science, because I had a crisis of confidence and thought that maybe I wasn't cut out for science. In the end, I got sucked back into it, because I took a class on marine mammalogy at our local aquarium. There I started analyzing the professor's data  -- sounds she had recorded from killer whales in Antarctica -- and that's when I made my first discovery: they actually make a sort of radio channel for their sounds that other animals don't use!

After that, I was hooked. I went back into graduate school to finish my Ph.D. at Northwestern University. I wanted to try to understand auditory perception -- how the brain processes sounds in time. I became fascinated with time perception in general, and that brings me to what I do now -- trying to understand how people predict future events in time, and how they make choices.

I have my own company, Mossbridge Institute LLC, which is a research/discovery services company -- what does that really mean? It means I create scientific methods and technologies that help people make discoveries. I like to focus these discoveries on consciousness, time, and prediction. The work itself depends on what's going on. For instance, over the next three weeks I'll be releasing an Android version of my app Choice Compass -- it uses heart rhythms to help people make more joyful choices. I'll also be applying for a grant with the Department of Defense. So there are lots of things to do!


3. Have you faced any discrimination/ challenges being a woman in a stem field? If so, how did you deal with it? Do you have any advice for up and coming women in STEM?

I have definitely faced discrimination as well as challenges as a woman in a STEM field. How I deal with it depends on how I'm feeling the day it happens! If I'm feeling strong and secure, I bring attention to the difficulty of the situation and how it is not fair for women to have to constantly defend their competence in every situation, especially in conversation with male scientists. If I am not feeling strong and secure that day, I remind myself that it's okay just to mentally correct the people around me, point out to myself that they are responding based on society's rules that they might not even understand, and I move on. My advice for up and coming women in STEM is to make sure you find clear and consistent motivation for your dreams inside yourself, because the external environment can be inconsistent in supporting and not tearing down those dreams. Return to your motivation and your dreams often, so you can maintain your persistence!


6. What do you think is the best advice you've ever received ? What advice would you give your younger self if you had the chance? What’s one piece of advice you can pass on to us?

Best advice, from a scientist much older than me: "There are as many ways to be a scientist as there are to be a human being."
Powered by