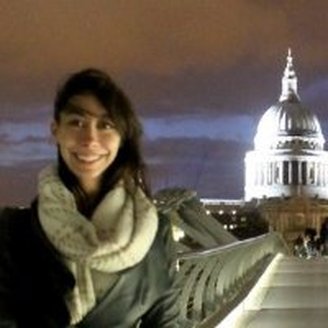 I grew up in California (mostly). As a kid I kind of planned on being an artist, but then I a sharp left turn into science when I was about fourteen and read a book called "The Whole Shebang" by Timothy Ferris. I actually remember being pretty torn up about having to choose between art and science, but decided that it would be easier to do art than science as a hobby. (Luckily I mostly managed to do both in the end.)

I took an actual physics class for the first time in high school, and that was both thrilling and sort of terrifying—I knew I loved physics, but I had no idea if I would be any good at it! But it turns out (and I'm a huge believer in this) that anyone can do it if they're willing to just buckle down and work hard at it. I think there's a really toxic idea in our culture that scientists are all born as scientifically inclined geniuses, but lots of us have been very successful without having ever been that kid who wants to do nothing but memorize more digits of pi. Like literally any other subject, it just takes a lot of stick-with-it-ness. And just because it's hard doesn't mean you're doing something wrong—it's actually just hard! And that's okay, it doesn't mean you "aren't made for it" or something. It's actually hard. The people who succeed are the ones who like it enough to keep trying. That's literally it.

I attended Carleton College, a liberal arts college with an excellent physics program, and did research in labs during the summer through the National Science Foundation's REU (Research Experience for Undergrads) program, which funds students to travel to other universities and get their hands on current research projects. I encourage anyone considering a career in science to apply to those programs, they're absolutely great and pay better than most summer jobs! After college, I went on to do a PhD at Cornell University, where I worked with Professor Paul McEuen. I studied graphene, a single-atom-thick layer of carbon atoms. In the fall 2014 I graduated and moved to Chicago as a postdoctoral scholar.

I'm currently a postdoc at the University of Chicago, where I'm joining a new program in a new department, The Institute for Molecular Engineering. The program, called STAGE: Scientists, Technologists, and Artists Generating Exploration, is a innovative program designed to bring artists and scientists together to tell stories inspired by science, and to use technology in novel ways on the stage. A lot of it is new to me—I've taken visual arts classes throughout college and graduate school, but the performing arts are a new adventure. So it's exciting, and I'm surrounded by a ton of fun and brilliant people from all different fields, and I have a lot of freedom to learn new things and explore my own interests.


3. How does STEM relate to your job? How do you use the information you learned from your degree in your job?

I'm not working in a lab anymore, but it's incredible how much my scientific training comes in handy every single day. I do still use some of my technical knowledge these days, but more importantly I use the fearlessness that a decade of science puts into your head. You get really good at figuring out how to approach a new subject, how to trouble-shoot, how to learn from people with different skill sets, how to push buttons until something happens, how to ask questions without being afraid. And that's hugely valuable no matter what you end up doing in the end.

I've been incredibly lucky—I never came up against anything overt, but I know that's partly luck and partly because I made a point of surrounding myself with good people. My graduate advisor was completely awesome, and very aware of these issues; so were the physics departments at my undergraduate and graduate institutions. The only weird comments etc. I've gotten have been from non-scientists, like things random people sitting next to you on a plane will say when you tell them you're a scientist.

Still, it is still a serious structural problem in a lot of subtle ways, and it can take a long time to realize that, and it's really easy to internalize a lot of it. Everyone I worked with had the absolute best of intentions, but it can still be weird to realize you're the only woman in a room, or that you censor your clothing or your professional behavior in ways that male scientists never have to think about. Having female and other minority friends and collaborators around to discuss these issues with is really important. My biggest piece of advice for young women starting out in STEM is the same advice I'd give anyone: pick good mentors and good colleagues, because it'll make or break your career. Good people matter more than literally any other factor. Oh, and learn about feminism, because it helps to understand some of the structural issues of our world and it can really help you avoid internalizing some of the bad stuff. Ah, and learn about impostor syndrome; most scientists (whatever their gender) have at least a trace of it, and it's good to know that there's a name for it and that it isn't just you!

The best part of my current job (my new postdoc) is that I get to learn a wide variety of subjects. Graduate school taught me that while I can temporarily be a decent specialist, I'm much happier as a generalist. The hardest part is that I mostly work alone right now, but that's just because we're still getting set up and hiring new people.

Yes! Make a real effort to have a personal life, whatever that might look like for you. Academia can be very competitive and can foster a culture of why-would-you-do-anything-but-work, but honestly for most people that's not a fun OR productive way to schedule your time. Most of us (though I have known a few honest-to-god exceptions) need to have downtime, need to have a social life, and need to have other activities that take us out of our work brains.

One thing I realized for me personally is that having a different but totally engrossing activity helped me to relax and start fresh the next day in the lab. If I went home and watched TV for three hours I'd get back to lab the next day all sluggish, feeling like I had just left work; but if I went and painted, say, for a few hours, I'd get totally involved in that and when I went back to work it would feel like I'd been gone for days.

Doing something you can get excited about. That doesn't mean you'll love every part of your job — life doesn't work like that — but doing work you can be proud of in a field that excites you is really a satisfying feeling. Remember that it might not always look the way you expect, either. It's easy for us to imagine there's one career out there that could possibly make us happy, but actually the day-to-day work of so many different jobs can overlap, and there are a lot of weird interesting jobs out there that will value your skills and give you an opportunity to contribute to something you care about. Make it work for you, whatever it might be, and be willing to keep an open mind.

Basic human decency might not be necessary for a career, but it sure helps. Kind, honest people who look out for others are the folks most people actually want to work with, and building a reputation as a good collaborator can do wonders for your career. Plus, you'll sleep well at night!

I've been incredibly lucky by the amazing people who have supported me throughout my career, from my family on through my teachers and colleagues. But I'd definitely give special props to my graduate advisor, Paul McEuen, who was the absolute best mentor anyone could hope for. He taught me a ton of science (and writing and problem solving and collaboration and etc. etc. etc.), but he was also just incredibly supportive and excited to help me do the best science I could, and he cared about my success and happiness outside of the lab, too. Those are the people you want to work for.

Best advice I've ever received was probably "be kind to yourself." If you're the kind of person who tends to push yourself and strive for things that hard difficult to achieve, remember to sometimes cut yourself some slack and treat yourself the way you'd treat a good friend.  Also, surround yourself with good people (see above), and don't be afraid if your interests seem unusual or all over the map — if you're passionate and you work hard, things tend to work out in ways you wouldn't expect.