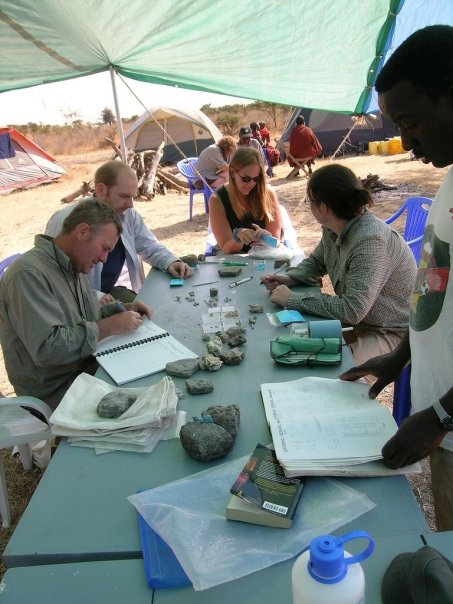 I grew up in Silicon Valley, in Northern California. I've always been broadly interested in both of the arts and sciences and I spent most of my high school life engaged in extracurriculars relating to art and music. My parents assumed that I might be a musician because I have (or at least had; I am embarassingly rusty now) a lot of natural talent and played several instruments proficiently. However, when I was 15, I decided that I did not want to end up a music teacher, and in a fit of teenage rebellion decided that I wanted to go into science - specifically either genetics or marine biology. Parents, I hope all of you have children who choose to rebel by foresaking a career in the arts for the hard sciences. I had no sense of an endgame, although I never wanted to be a medical doctor, but those were two subjects that interested me so I went for it. I ended up looking largely at colleges with strong marine biology programs, and then ended up going to The George Washington University which has a pretty good biology program, but no real marine biology program; this decision was based largely on lack of proximity to California and pleasant but hazy memories of fun times in Washington DC on a trip I took in seventh grade. It was the only university that I didn't tour, and I applied late.

Thus I began university as a biology major packed into my giant introductory classes full of students driven by a deep fear of failing the MCATs. I didn't enjoy the enivornment and I didn't really enjoy my biology classes. My favorite course at GW in my first semester was my introduction to cultural anthropology class which spurred me to seek out other anthropology courses. That's ultimately how I fell into biological anthropology. It seemed like biological anthropology had everything I was interested in from biology - genetics, ecology, animal behavior, evolution, and the fossil record - without any of the things that I found less appealing. As an added bonus, the classes were smaller and had a greater emphasis on discussion than the courses in the biology department. I switched my major to anthropology with a concentration in biological anthropology in the middle of the second semester of my freshman year. (That same semester I also picked up a major in English with a concentration in medieval literature because I apparently I was drawn to both small classes and old things). I really developed a passion for the study of human evolution and ended up getting my Ph.D. in biological anthropology from the CUNY Graduate Center in New York City (part of the New York Consortium in Evolutionary Primatology). I followed that with a postdoctoral position where I was based at the American Museum of Natural History, also in New York.

When people ask me what it is that I study, I say that I am a paleontologist interested in the evolution of locomotor diversity in primates. (When people ask my mom what I do, she says, "Bones...?") My actual job title is Assistant Professor of Biomedical Sciences and I am at Grand Valley State University. On a day to day basis, I'm responsible for teaching and mentoring students, accomplishing my research goals, and doing administrative service for the university. I could be doing something wildly different depending on what time of year it is. During the fall and winter semesters, I mostly spend my time teaching gross anatomy to undergraduates and graduate students in our physical therapy program or in front of the computer writing papers and running statistical analyses for my research. I am usually juggling several projects at once. In the spring and summer I am lucky enough to be able to be involved in field research and I am currently working at a site in Colombia, although in the past I've been involved in field sites in Tanzania, China, Kenya, Spain and South Africa.

When I'm out doing fieldwork in Colombia, the days are actually a bit more exciting (because fossils!), but also have a greater degree of sameness. We collect fossils largely using survey methods, which basically means that we wander around in an area and pick up any fossils that we see. We take GPS points to digitally record all the Really good finds, and GPS tracks around the boundaries of the fossil exposures. Usually we try to walk transects, which is when everyone forms a line shoulder to shoulder and walks in a straight line, picking up fossils along the way. In this situation, usually we get up pretty early - breakfast is typically around 6:30am - and then we either hike or drive to the locality that we are going to survey. This could take as little as 20 minutes or as long as 2 hours. We work for the majority of the day and the have lunch around 1:00pm. If we are near camp, we'll go back there for lunch. If we are driving far away, we will usually pack a lunch with us. After lunch, a couple of us usually stay back to catalog fossils and we will keep a couple of students with us to help sort, and make cards, and write numbers and bag up the specimens. The other half of our group usually goes to a hikeable locality and gets more fossils. Then, free time until dinner. Dinner is usually around 7, and then I'm usually in bed by 9pm because when there are no lights and no sun, and I've been working hard all day, staying awake is difficult.


3. How does STEM relate to your job? How do you use the information you learned from your degree in your job?

I use the things I've learned every day - particularly science and math. When I was a little kid I thought I hated math, but it turns out that I hate arithmetic and algebra but love geometry and statistics. The data I collect for my research allows me to visualize shapes and shape changes among individuals in space using three dimensional models which I make from original specimens.

I don't think that I've personally faced any discrimination, although I am aware of other people who have had to deal with this. I have had inappropriate comments made to me from time to time and my usual tactic is to simply call out the person who made the inappropriate comment and embarrass them. This tactic is not necessarily what is best for my career but I find that my mouth often moves faster than the logic processors in my brain. As far as advice, I don't know that I have any more insights than anyone else; if you are facing discrimination, be aware of the laws at your university and if you are junior, find someone more senior who can be a strong advocate for you.

The best part of my job is getting to do something different every day. I don't think I would enjoy an office job where each day is similar to the next. The worst part of my job is that I'm always taking work home with me. I think academics have a tendency to define themselves in relation to their work and I don't think that's completely healthy. I try very hard to set aside non-work time, especially on weekends.

You just have to make time for what is important for you. I doubt anyone on his or her deathbed has ever thought, "If only I'd published one more paper!" I don't have any kids which helps a great deal, and I have a lot of admiration for women who have children and maintain high stress and high profile careers. I couldn't do it!

Persistence. I almost walked away from my degree a number of times, but I pushed through in the end.


9. Who was a mentor to you throughout your career? What did they teach you? How did they impact your life?

I don't know that I had a single mentor throughout my career. My Ph.D. adviser was great and we continue to collaborate even though I've been out for over 5 years now. I'm also thankful to have come through my graduate program at a time when the students weren't terribly competitive and I had a lot of support from my fellow grad students.

​
10. What do you think is the best advice you've ever received ? What advice would you give your younger self if you had the chance? What’s one piece of advice you can pass on to us?

My advice to my younger self: follow the money! I got a great education in an amazing city and I had tons of opportunities. However, New York City was expensive and I spent a lot of time working long hours as an adjunct and grad student, and then later as an adjunct and a postdoc. I could probably have been equally successful in a different graduate program in a cheaper city where my money would have gone much further and I would have consumed far less Zantac. This advice is more pragmatic than pithy, but I've come a long way from the double major in medieval literature and biological anthropology who attended a university she'd never even visited because it was far away from home.
Powered by