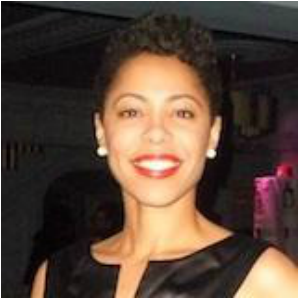 This is a Bio taken from sciencecareers.org

Forging the Way for Other Minority Scientists
By Elisabeth Pain
May 22, 2013

"The impostor syndrome that had plagued me pretty much since I left undergrad, I was finally winning out over it."—Knatokie Ford

Knatokie Ford was sitting in a movie theater when she discovered a quote from Marianne Williamson, often misattributed to Nelson Mandela:

The movie she was watching, Akeelah and the Bee, portrays a young girl from a poor African-American community as she wins a shared victory at the Scripps National Spelling Bee. At the time, Ford was working as a substitute teacher in an underserved community in Los Angeles. She had already earned bachelor's and master's degrees at Clark Atlanta University in Georgia. She had started a biological and biomedical sciences doctoral program at Harvard Medical School in Boston—but her insecurities and the feeling that she was ill-prepared prompted her to take a leave of absence to reevaluate her life and career goals, not knowing whether she would return.

The words in that quote resonated with her. She realized that she wasn’t living up to her full potential and that she was allowing the fear of failure to stifle her “light.” She decided to "take ownership of my role as a … potential inspiration to young students who may not have all the resources or feel like they have odds in their favor," she says.

Ford grew up in Akron, Ohio, the youngest of four children in a blue-collar family. Her parents encouraged her to strive for academic excellence. Watching them struggle financially, she concluded that "getting an education was my ticket to a better life, not just for me [but] for my family," she says.

After high school, Ford attended Clark Atlanta University, earning a B.S. and M.S. in a 5-year accelerated program in chemistry at the minority-serving institution with a PRISM-D (Program for Research Integration and Support for Matriculation to the Doctorate) Scholarship. She had always been confident in her academic abilities, but her experience at Clark Atlanta also instilled in her a "good sense of self-love, and positively affirmed my identity as a black woman." By the time she left Atlanta in 2004, she had become vice president of the Beta Kappa Chi National Scientific Honor Society, a member the Golden Key National Honor Society, and obtained an M.S. degree in biological chemistry, summa cum laude, with honors.

Blind in one eye since she was 3 years old, Ford had always been interested in vision research, but she was unsure about attending graduate school. She applied to Harvard "as a why not" after her then–department chair, Mark Mitchell (now at Kennesaw State University, also in Georgia), encouraged her to take the chance. "She was just so motivated and so smart, and yet I did have the impression that she maintained some uncertainty about whether or not she could be successful," he writes in an e-mail to Science Careers. "I encouraged her to apply because she was just such a great student."

Ford expected Harvard to be challenging; even so, it was "a bit of a culture shock," she says. "As much as I loved my experience at Clark Atlanta, I don’t think that I came to Harvard fully equipped."

Most challenging were the frequent small-group meetings where scientific papers were discussed. "It was really intimidating for me because many of my classmates just seemed to know it all already, and they were all so eager to speak up," she says. Ford had been a straight-A student at Clark Atlanta, yet she did not feel ready to contribute.

After one semester in the program, Ford left for Los Angeles to pursue an acting career. She secured a few gigs as a background actress—and "quickly discovered that I was not willing to starve to be an actress." First to support herself—and then because she had a knack for it—she became a substitute teacher in the Los Angeles Unified School District, teaching mathematics, English, computer science, and American history, primarily at a middle school in "a very rough neighborhood."

Seeing the impact that she had on the students as she shared her life story made the opportunity at Harvard seem more attractive. "I owed it not just to myself to prove that I could do it, but also to the students; I wanted to be a role model for kids."

Ford resumed her graduate program in September 2006, but after a year and a half away, she found it even harder than before. She worked hard, but she also recognized that she needed help. "I took advantage of the tutors my program offered. It was a really humbling experience, but it was very helpful," she says. "There were a lot of prayers and tears involved in the process, but I made it through."

Typically outgoing, during her first year back at Harvard she "felt like the invisible woman. I felt no one cared to … get to know me and I didn’t feel compelled to go out of my way to make friends among my classmates. I retracted into a self-imposed shell."

Everything changed during a rotation in the lab of ophthalmology researcher Patricia D’Amore at Harvard's Schepens Eye Research Institute in Boston. There, she found a diverse, collaborative, and friendly environment to work in and grow, as a scientist and as a human being. She eventually joined the lab for her Ph.D. thesis research, studying the potential side effects of a common treatment for age-related macular degeneration.

"Her contributions to the lab were both at the personal and scientific level," D’Amore writes in an e-mail to ScienceCareers. "Scientifically, she worked on a project that not only revealed an important role for a specific growth factor (VEGF) in the physiology of an ocular structure called the ciliary body but she also demonstrated that there might be unexpected and undesired side effects from a widely used treatment for a variety of ocular diseases. On a more personal note, she was energetic, had a great sense of humor and helped to make the lab a fun and comfortable place for everyone to work."

During her third year in graduate school, Ford won an award at an annual poster competition at Harvard Medical School. The award marked "a turning point, where I was getting a sense that I was doing more than surviving and starting to actually thrive at school," she says. Ford defended her dissertation in April 2011. She published three first-author papers from her thesis work.

At Harvard, Ford continued to support other minority students. She served as president of the Minority Biomedical Scientists of Harvard. She gave motivational presentations to undergraduates and middle to high school-aged students from underprivileged areas, served as a mentor in a summer research program, and helped recruit minority graduate students to Harvard. "All these amazing young people that I’ve met along the way served as a constant reminder of why I just have to keep trying, even when it’s hard, even when I don’t always feel confident, … to show other people that it can be done."

When she returned to Harvard to finish her Ph.D., Ford already knew that she was interested in pursuing a nonacademic career. After talking to a career counselor, she concluded that science policy seemed like a good career fit. She developed, with D’Amore, an individual development plan aimed to helping her finish her Ph.D. in time to start a policy fellowship. "It really helped me focus and buckle down in the lab," she says.

To her frustration, her applications to the Presidential Management Fellows Program and the National Academies’Christine Mirzayan Science and Technology Policy Graduate Fellowship were not successful. So she took a postdoctoral position in the lab of Jack Lawler at the Beth Israel Deaconess Medical Center in Boston. The postdoc experience proved affirming: The troubleshooting she had done during her Ph.D. paid off with a stream of quick results. It was "another boost for my confidence, really being able to see evidence that I deserved to be where I was," she says. "The impostor syndrome that had plagued me pretty much since I left undergrad, I was finally winning out over it."

The postdoc gave her time to prepare an application for the AAAS Science and Technology Policy Fellowship. In what Ford sees as one of her biggest breaks, the application succeeded. Today, she helps run PCAST meetings, coordinate studies, edits reports, and has provided briefings about PCAST reports to federal agencies. "It’s a trial by fire," she says. "At this point, I am learning as I go." The skills she gained as a scientist—multitasking, project management, analytical skills, and the ability to quickly get up to speed on new topics—have helped her in the new work. Both Mitchell and D'Amore praise her communication skills, which should serve her well in a policy career. Ford enjoys the broader perspective inherent in the work, and the potential to have an impact on society.

Leaving what had become a successful research career to start from scratch exploring a new career has been challenging. "There is always that temptation to doubt and question yourself," she says. But, nowadays, she benefits from the resilience and savvy that she has developed from her experiences in graduate school and beyond. "I have learned the importance of defining my own metrics for success. If I can compare myself to where I was 6 months or a year ago and see progress, then that’s all that truly matters."