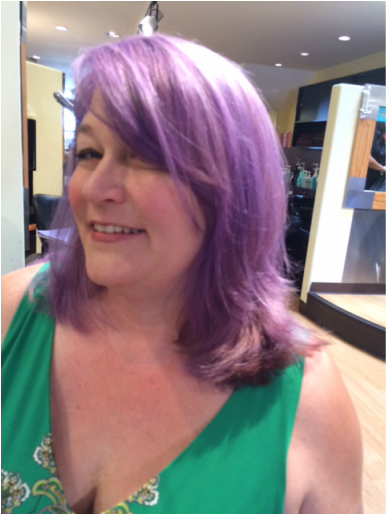 My parents moved to Southern California from the Chicago area in 1960 and settled in northeast Los Angeles County. I was born in 1963 and grew up in Sierra Madre, a small town in the foothills just above Pasadena. I attended Catholic elementary and high schools, which gave me an advantage, because the 1960s and 70s were not a great era for public school excellence in this area. I believe that I and other women of my generation were influenced by the Women’s Liberation movement of the 1960s, which conveyed to us that girls could be anything they wanted to be, including then-male-dominated fields like science, math and engineering.
I attended Humboldt State University in Northern California, from 1981-1985, and obtained a BA in Journalism with a minor in Radio Broadcasting. I worked as a newspaper reporter at a small environmental publication and then at a traditional regional newspaper, covering local events, from school awards to new business openings to the battles between environmentalists and loggers over the region’s last remaining stands of old-growth redwood trees. I think the latter galvanized my interest in the environment--I saw too many precious, ancient forests clear-cut for use as hot tubs and fencing during those years to not want to do something to protect what was left of them (less than 5% were still standing at that time).

I moved back to Los Angeles in 1990 and volunteered for a group creating an Earth Day event in Pasadena. Earth Day had first occurred in 1970, but annual events were not common at that time. I wound up getting hired by the event Director, Tim Brick, who is also a mentor to me--he’s a water resources expert that served on the Metropolitan Water District Board for many years. Our Earth Day was hugely successful and continued to be held for several more years after that. Our volunteer team planted oak tree starts that are now grand trees in the Arroyo Seco area of Pasadena. I am very proud of this.

At these Earth Day volunteer meetings, I met John Roulac, who had a small environmental consulting business in Pasadena, Harmonious Technologies. He hired me to write a book, Backyard Composting, which we self-published, and it has sold over 600,000 copies! We also taught a lot of home composting workshops.
Following this era, I found work with local governments, first for City of Ventura, teaching composting workshops, then City of Thousand Oaks, running their oil recycling program, then Santa Barbara County, doing commercial recycling programs, followed by Ventura County, also doing commercial and residential recycling implementation. In 2003, I was hired by Disney.

For 12 years I have worked at Disney as a Senior Representative, reporting to a Director. For the first half of my career here, I tracked our recycling and other environmental efforts, communicated to Cast Members (employees) about our environmental expectations of them, and applied for (and received) external recognition for our efforts (US EPA WasteWise Hall of Fame; CalRecycles Waste Reduction & Awards Program). Presently, I do a lot of research and writing in support of our Company’s environmental standards and policies. I’m most proud of our paper policy, which requires that we know what the origins of the fiber we use was, and whether it was sustainably harvested or not. It is helping to reduce illegal logging and rainforest destruction in places like Indonesia and Peru.


3. How does STEM relate to your job?How do you use the information you learned from your degree in your job?

My degree is in journalism, which is not a STEM area, and I am not a scientist, but I did learn how to research and write well, so that I can, for example, read a report written by a scientist, and then help explain it to non-scientists! Journalism courses also teach really important other things, like ethics and accuracy and balance, which are all important aspects of the environmental research that I do for Disney.

No, I truly do not believe I have ever experienced discrimination because of being a woman--as a matter of fact, I believe it’s been a huge advantage. I possess all those great female traits like good communications skills and interest in other people, which has made it easy to make professional and social connections, all my life.

The best part of my job is feeling like I am protecting the environment on a global basis, by helping to guide my company in greener directions. I do wish that I had the opportunity to travel more, but due to budget limitations as well as environmental considerations, I and most of our team here work together electronically, through e-mail, websites and webinars.

I will say that I seldom get all the sleep that I would like to, especially because I’m a single mom and have raised a now 19-year-old son, on my own, without much help from his father. But one thing that’s really helped over the years is having a 9/80 schedule--I work 9-hour days and then take  a day off every other Monday. I’ve been able to use those Mondays to help out at my son’s schools over the years or spend quality time with him that I can’t on other weekdays. Or I just do errands and schedule appointments that need to be done during weekdays, like dental checkups. I really appreciate that my company is moving in a direction of providing even more flexibility for employees, and thanks to my laptop and a little VPN device, I can bring my computer home and work just the same as if I was in the office. Teleconferencing and teleworking rocks!

I think being successful means you feel pretty happy on a day-to-day basis with what you are doing in your life and feeling like it’s making a positive difference in the world. I would not feel successful if I was just earning a fat salary but did not really enjoy what I was doing to earn it!

I think an interest in the world and the people, animals and plants that occupy it is critical to a successful career, in STEM or any other field. We all depend on the Earth and its resources for our survival and I’m thankful that many people are now aware and working to guide us in more sustainable directions, so that it will be here for future generations!

My first mentor was Maggie Gainer, who was working as a recycling consultant in Humboldt County in the late 1980s. I met her while writing a newspaper story about regional recycling programs. I had not known before meeting her that it was even possible to have a “job” in recycling! I asked her if she might need help, and she did--she hired me to help her produce the 1989 California Resource Recovery Association (CRRA) conference.

The best advice I could give my younger self and others is: have faith in yourself and take calculated risks. Don’t be afraid to pursue something just because “everybody else” is not doing so (yet). I took a huge risk entering the environmental field in the early 1990s, when it wasn’t really considered a “field” at all and most of the people working on environmental issues then did so as volunteers. Companies were not hiring people to guide them environmentally, and I am sure my parents worried that I was going to starve! Yet it’s become one of the hottest professions out there and I’m working with people in their 20s who have obtained undergraduate AND master’s degrees in the field. I predict that it will only continue to grow, as the world’s resources become more limited and more demands are placed on them.
Powered by