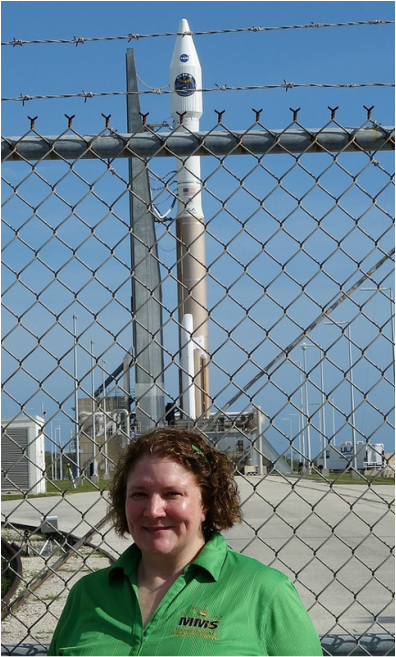 I grew up in a small town in northern Minnesota where we could frequently see the aurora borealis or northern lights, especially during solar maximum.   Learning about what causes the northern lights is one of the things that got me interested in my current field of research.

I have a Ph.D. in physics from the University of Minnesota, and my area of research is space plasma physics, also known as heliophysics.  Heliophysics involves studying interactions between the solar wind and Earth’s magnetosphere that cause the northern lights, geomagnetic storms, and variations in the Van Allen radiation belts.   Research in heliophysics has applications in space weather forecasting – predicting the effects of solar flares and coronal mass ejections from the Sun on the Earth’s magnetosphere to mitigate the risks caused by geomagnetic storms to communication and navigation satellites, electrical power systems, and human spaceflight.

I am a research scientist at the University of Iowa, home of famous space physicist James Van Allen.  The research group I work with builds instruments for NASA (National Aeronautics and Space Administration) sounding rockets and satellites, and once they are launched into space, we analyze the data collected by these instruments.  The University of Iowa has been involved in many NASA missions to explore Earth’s magnetosphere and the other planets in our solar system starting with the first successful American satellite, Explorer I, launched on 1 February 1958. Explorer I carried a cosmic ray instrument built by James Van Allen which was used to discover the Earth’s radiation belts. You may have heard that the Voyager 1 spacecraft, which was launched more than 35 years ago, has left the solar system and entered the interstellar medium.  This discovery was made using observations from a plasma wave instrument built at the University of Iowa.

Recently, scientists and engineers from the University of Iowa built the Electric and Magnetic Field Instrument Suite and Integrated Science (EMFISIS) for the Van Allen Probes mission. The Van Allen Probes mission consists of two satellites that were launched 30 August 2012 from the Cape Canaveral Air Force Station to study the radiation belts.  One of my current research projects is analyzing data from the Van Allen Probes, along with data from the THEMIS (Time History of Events and Macroscale Interactions during Substorms) mission, Cluster mission, and the National Oceanic and Atmospheric Administration (NOAA) Geostationary Operational Environmental Satellites (GOES) to improve our understanding of the physical processes that cause the acceleration and loss of relativistic electrons in the radiation belts during geomagnetic storms.   Once I’ve analyzed some satellite data, I write papers on the results for publication in scientific journals, like the Journal of Geophysical Research, and give presentations at scientific meetings held by the American Geophysical Union.

The University of Iowa also built the detector optics for the Electron Drift Instrument (EDI) portion of the FIELDS instrument suite for NASA’s Magnetospheric Multiscale (MMS) Mission.  MMS consists of 4 satellites to study magnetic reconnection in Earth’s magnetosphere that were just launched a couple of weeks ago on 12 March 2015 from the Cape Canaveral Air Force Station.  I have been running computer models of the EDI detector optics to improve their performance over similar instruments that were flown several years ago on the joint NASA/European Space Agency (ESA) Cluster mission.   In May 2015, I will travel to a conference where the scientists, engineers, and computer programmers involved with MMS will report on the operational status of the instruments and present the first scientific results from this mission.


3. How does STEM relate to your job?  How do you use the information you learned from your degree in your job?

Science:  A strong background in basic physical principles and specialized knowledge of plasma physics are needed to do my job. Basic orbital mechanics, the motion of charged particles in electric and magnetic fields, and the physics of plasma waves in the Earth’s magnetosphere are some of the scientific principles I use in my work.

Technology:  Heliophysics is a relatively new field of research because we could not study many of the physical processes related to geomagnetic storms until we developed satellite and rocket technology.   Computer technology is also important to heliophysics because satellites return huge amounts of data that must be analyzed.   Computers are vital to the numerical and assimilative models of the Earth’s magnetosphere and radiation belts being developed for space weather forecasting.  The technology we use in heliophysics is always changing – the instruments flown on modern NASA missions have significant improvements over those first flown on Explorer I more than 50 years ago.

Engineering:  Most of the scientific instruments flown on NASA satellites to study the Sun, the Earth’s magnetosphere, and the planets in our solar system are custom built for each mission at universities and other research institutions around the country. Scientists, engineers, machinists, and technicians all work closely together to design, build, and test these spaceflight instruments.

Mathematics:  A strong foundation in mathematics is needed in heliophysics to understand the equations used to describe electric and magnetic fields, the propagation of plasma waves in space, and the motions of electrons and ions in the Earth’s magnetosphere. The computer software I use to model the EDI for MMS uses a Runge-Kutta numerical method to solve the electron trajectories inside the detector.  I also use mathematical techniques like Fourier transforms, curve fitting, and statistical methods to analyze satellite data.

I studied a lot of the physical concepts and data analysis techniques I use in my research when I was in graduate school, but I am still learning new things all the time.    Keeping up with new analysis techniques, recent developments in technology, and the latest scientific results is always a challenge.


4. What is the best and worst part of your job? What do you look forward to in your job on a day to day basis? What do you wish you could change?

One of the best parts of my job is seeing a project you’ve worked on get launched into space.  I was able to travel to Florida to see the MMS launch in person on 12 March 2015.  Rocket launches are pretty cool!  Especially night launches!

Another interesting aspect of working in heliophysics is collaborating with other scientists from the United States and around the world.  Satellite and sounding rocket missions are very complicated and require working with people who have expertise in many different areas of science and engineering.   We do a lot of collaborative work through e-mail and teleconferences, but sometimes we also travel to meet with other scientists in person.    I have been to conferences in Japan, France, Finland, and the United Kingdom, as well as various meetings in the United States.    I’ve been to Alaska twice, in winter.  I’m not sure if that counts as one of the best or worst parts of my job – it’s cold there!

The worst part of my job is writing proposals to obtain research grants.  Federal funding for scientific research has been rather tight for many years now, and is strongly influenced by politics. Every year, the application requirements change and competition is fierce.  Even if you spend a long time carefully developing a new research project, your proposal might still be rejected.

Also, keeping up with all the acronyms and abbreviations we use in the space sciences isn’t easy.  I counted at least 9 in this interview, and there are many more that we use every day!


5. What is one personality trait that you think is universally important for a successful career?

I think perseverance is very important.  In science and engineering, you may not completely solve a problem on the first try.  The key is to document your work, analyze the data, and keep revising and refining your approach until you find the best solution.


6. Who was a mentor to you throughout your career? (can be more than one!) What did they teach you? How did they impact your life?

I have encountered many interesting people throughout my career, starting back when I was a student at the University of Minnesota.  The first undergraduate physics course I took was taught by Hans Courant, who worked on the Manhattan Project during World War II and is the son of the well-known mathematician, Richard Courant.  His parents associated with many of the legendary names that appear in science and mathematics textbooks, like Albert Einstein, Niels Bohr, David Hilbert, Carl Runge, and Emmy Noether.  There is a tendency for people to view these influential scientists and mathematicians as loners who possessed a natural genius that cannot ever be achieved by others. Professor Courant’s stories about growing up surrounded by famous scientists and mathematicians showed us that they were normal people with friends and families who made their extraordinary contributions to modern science and mathematics through hard work and collaboration with colleagues.


6. What do you think is the best advice you've ever received? What advice would you give your younger self if you had the chance? What’s one piece of advice you can pass on to us?

Several years ago during a special student research colloquium at the University of Iowa, someone asked James Van Allen if he had any advice for the students.  He said “If at first you don’t succeed, don’t be an idiot.  Try a different approach.”
Powered by